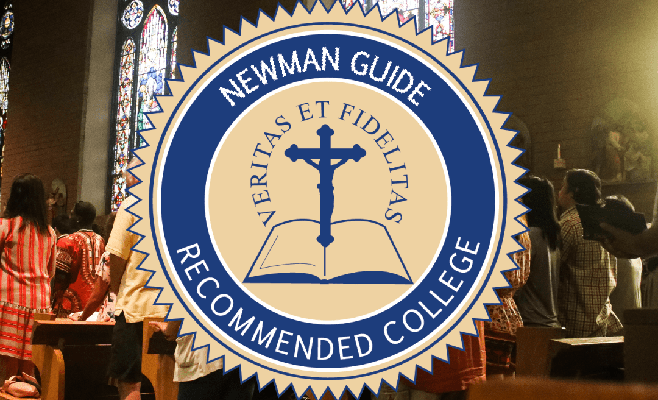 The State of Catholic Higher Education

3rd Sunday Year A: The State of Catholic Higher Education

Last week’s Gospel related the story of the Baptism of Jesus in the Jordan River by John the Baptist at the Jordan. This week’s Gospel relates the beginning of Our Lord’s public ministry, which He initiates with these words: “Repent, for the kingdom of God is at hand.” Jesus calls fishermen, Peter & Andrew, James & John, to assist Him in spreading the Gospel.

Giving witness to Jesus and the Kingdom of Heaven is a duty imposed on all of us by reason of our baptism. That’s why we all have a duty to grow in our knowledge of the Catholic Faith – a good subject to address today as we begin Catholic Schools Week.

I’m taking the opportunity today to preach on the state of Catholic higher education. And I’ll begin with a true story.

In July 1967, Fr. Theodore Hesburgh, then president of the University of Notre Dame, gathered the leaders of 26 Catholic universities at a retreat center in Land O Lakes Wisconsin.

Over the course of their four-day meeting, they drafted a “Statement on the Nature of the Contemporary Catholic University” which became later known as the “Land O Lakes Statement.”

This statement boldly declared that bishops should not “interfere” with the Catholic academic world: “The Catholic university”, they said, “must have a true autonomy and academic freedom in the face of authority of whatever kind, lay or clerical, external to the academic community itself” (emphasis added).

In effect, the statement rejected the role of bishops, in their teaching authority, in overseeing Catholic education – in the name of so-called “academic freedom.”

In the years that followed, many professors at Catholic colleges began to present theological opinions which contradict Catholic teaching; and they did this in the classroom to unsuspecting students (and their parents, who were paying for their education), which undermined their faith.

Fast-forward to 1990. Pope St. John Paul II, who was a university professor himself, saw the extreme danger and harm caused by this state of affairs in Catholic higher education.

To remedy the situation, he issued a document called Ex Corde Ecclesiae (“From the Heart of the Church”), which states that to teach theology in a Catholic college or university, a professor must take an public oath of fidelity to the Catholic Church’s authentic doctrine, and pledge to not put forth anything contrary to the Church’s teaching, after which the professor would receive a mandatum (an official mandate or permission) from the bishop of the diocese to teach.

This makes perfect sense, doesn’t it? To teach theology at a Catholic institution of higher education, one must pledge to teach faithfully with the Catholic Church believes and teaches. A no-brainer!

But, alas, most of the Catholic colleges and universities in this country rejected Pope St. John Paul’s document and to this day refuse to require a mandate for theology professors to teach at their universities.

They do so by asserting a “right” or license to dissent from the Catholic Church’s authentic teaching – especially in the area of sexual morality – in the name of “academic freedom” – which is really a false notion of freedom; for authentic freedom means exercising one’s will in conformity to the truth revealed by God and the Church which Jesus Christ founded.

I’ll give some examples of how these Catholic colleges and universities violate the norms of the Church and by doing so corrupt minds and hearts of the students whom they teach. I’ll preface this by saying that at these Catholic colleges there are teachers who faithfully teach what the Church teaches; but there are also those who do not, and the unsuspecting student may take a theology class and not be aware that the professor is teaching something contrary to the faith.

I’ll begin with my alma mater, Loyola University Chicago, where I received both my undergraduate and law degrees. About 25 years ago Joe Scheidler of the Pro-Life Action League in Chicago called me, complaining that Loyola Law School was encouraging students to work for Planned Parenthood (the largest abortion provider in the country) in their lawsuit against the Pro-Life Action League.

I wrote to the university president and to the law school dean in protest, but received no response.

Over the years I wrote to the university president many times (like when it permitted a “drag queen fashion show”), stating that I was a priest and an alumnus. I said that Loyola should be forming students to engage in the current culture war from a Catholic perspective; instead, it is de-forming students to go along with the current culture of death. I never received a response, and I’ve stopped writing.

Across town from Loyola in Chicago is DePaul University, the largest Catholic university in the country. DePaul features programs in gender and LGBTQ studies. A few years ago one professor, who openly lives with her female partner, was quoted as saying that “the number of LGBT faculty has grown to the point where today I know that I don’t know all of the lesbian, gay, bisexual and transgender faculty at DePaul.” You can imagine what these professors are teaching students.

For decades a tenured professor at DePaul, ex-priest Dominic Crossan, poisoned the minds of students in the area of Scripture. He taught that Jesus Christ was not really God and that He did not rise from the dead; rather, His body was thrown into a ditch for scavenger dogs to eat his bones. I have his book, and had a public exchange with him on public radio some years back.

Georgetown University – the first Catholic college in the United States – was Father Ben Reese’s alma mater. In the mid to late 1970s, when he attended Georgetown, he had a number of classes with professors who dissented from the Church’s teaching. He always swore that he was going to send his diploma back for their antics.

About fifteen years ago Cardinal Francis Arinze, who was then Prefect of the Vatican’s Congregation for Divine Worship, gave the commencement address at Goergetown, in which he defended natural marriage between one man and one woman. Many faculty members stomped off the stage at his remarks. I saw Cardinal Arinze shortly thereafter and congratulated him for his courage.

A few years back Georgetown grad William Peter Blatty, author of the book The Exorcist, brought a canon law suit against Georgetown, in which he was joined by thousands of alumni and students. The suit claimed the Georgetown was departing from its Catholic mission by having faculty who advocate for abortion and same-sex marriage, and by inviting pro-abortion speakers to address students.

Two years ago the University of Dayton, where I did my graduate studies in Mariology, issued norms saying that students should not use words “husband” and “wife”; these words are deemed “inappropriate” because they are gender specific, and “wife” no longer refers specifically to a woman who was married to a man; nor does “husband” refer to a man married to a woman.

In case you didn’t know it, we’re in a time of gender confusion, and the University of Dayton’s norms help to foster this confusion among its students and faculty.

Although I could go on with many more examples, I’ll finish off this brief survey to speak about the Catholic University to the north, Marquette. Back in 2014, an undergraduate student came to see Dr. John McAdams, a tenured professor who taught at Marquette over 30 years.

The student complained that in a philosophy class taught by a graduate student instructor, the issue of same-sex marriage came up. The instructor allowed no discussion because she claimed that there could be no genuine disagreement about same-sex marriage now that the U.S. Supreme Court had allowed it in this country.

Prof. McAdams sent an email to Marquette university faculty members, complaining that if Marquette claims to be a truly Catholic university, free and open discussion about such topics should be encouraged, not discouraged. Prof. McAdams was fired for his actions. He took the case to court, and the Wisconsin Supreme Court just last year ruled in his favor, ordering Marquette to re-hire him.

About a week ago I talked to a graduate student who formerly taught theology at Marquette, who informed me that all professors at Marquette are required to address students by the pronouns of their choice rather than the pronoun that conforms to their sex. For example, if a female student identifies as a male, professor must use the male pronoun or else be fired.

This, my friends, is insanity. To go along with students with gender dysphoria and conform to their demands does not help them, but makes the problem worse.

In 1993, in response to St. John Paul II’s call to assure the Catholic identity of Catholic colleges and universities, the Cardinal Newman Society was founded.

The Society was named in honor of the recently canonized John Henry Cardinal Newman, who was a convert from Anglicanism to the Catholic Church and great scholar himself and promoter of education (he penned a famous book, The Idea of a University). The Society reports on the fidelity – or infidelity – of Catholic institutions of higher education.

Cardinal Newman Society also publishes a Newman Guide to Choosing a Catholic College (now only online), which lists all the Catholic colleges and universities in the United States which are faithful to the Church’s teaching and which require their theology professors to take an oath of fidelity to Church teaching and to receive a mandate from the bishop to teach.

I tell parents that if you’re considering a Catholic college and want to know where it stands, just ask: “Do your theology professors swear an oath of fidelity to Catholic teaching and do they receive a mandate from the bishop to teach?” If they say “No” and give you some line about “academic freedom” – beware! That’s a likely warning sign they allow dissenters to teach there.

Some years back the Higher Education Research Institute at UCLA compared results of a survey given to college freshmen, then given to these same students as graduating seniors. The results showed that students attending Catholic colleges were more likely to support legalized abortion and same-sex marriage than students attending private/secular colleges.

The purpose of a Catholic university education is to instill in students a love for Truth, Goodness and Beauty in the context of our Holy Catholic Faith. Authentic Catholic colleges do just this, and form the hearts and minds of students to allow them to engage our modern culture which is in so many ways anti-Christian and promotes a culture of death.

On this Sunday that we begin Catholic Schools Week, let us pray for our Catholic grade schools and St. Joseph’s High School here in Kenosha; and let us invoke St. John Henry Cardinal Newman and Pope St. John Paul II to intercede for all Catholic colleges and universities, that they may be faithful to their mission to form the minds and hearts of students in the beauty of the truth of our Catholic Faith.