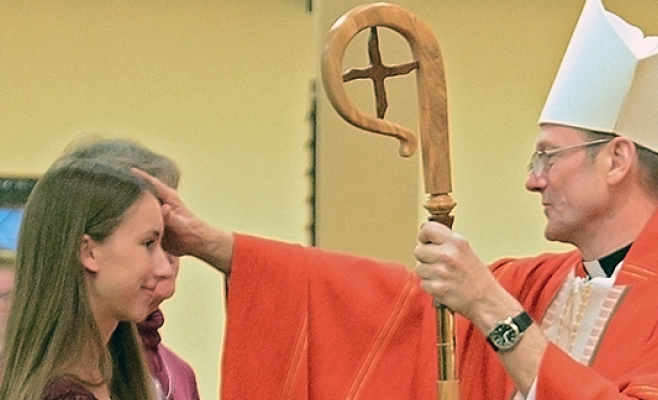 Confirmation Strengthens Us to Witness & to Suffer for Christ

St. Augustine offers some beautiful thoughts upon which to meditate in this holy Season of Easter:

“Because there are these two periods of time—the one that is now, beset with the trials and troubles of this life, and the other yet to come, a life of everlasting serenity and joy—we are given two liturgical seasons, one before Easter and the other after.

“The season before Easter signifies the troubles in which we live here and now, while the time after Easter which we are celebrating at present signifies the happiness that will be ours in the future.

“What we commemorate before Easter is what we experience in this life; what we celebrate after Easter points to something we do not yet possess.

“This is why we keep the first season with fasting and prayer; but now the fast is over and we devote the present season to praise. Such is the meaning of the Alleluia we sing.

“Both these periods are represented and demonstrated for us in Christ our head. The Lord’s passion depicts for us our present life of trial—shows how we must suffer and be afflicted and finally die. The Lord’s resurrection and glorification show us the life that will be given to us in the future.”

This holy season of Easter is a season of new life – in Christ.

We receive this new life in Baptism, when we the very life of God (called Sanctifying Grace) is poured into our souls – that divine life which was lost to us by Adam’s sin and which Jesus Christ redeemed/won back by dying on the Cross.

And we are strengthened in that divine life – with the Gifts and graces of the Holy Spirit – by the Sacrament of Confirmation.

We see this truth revealed in our readings on this 6th Sunday of Easter.

The first reading is from Acts of Apostles: It relates the story of how Philip (not the Apostle but one of the first seven deacons) was casting out demons and healing people in the City of Samaria.

Philip also baptized people there, but as a deacon he could not administer the Sacrament of Confirmation which would bring the full outpouring of the Holy Spirit upon them.

That’s why the Church sent the Apostles Peter and John, who had the apostolic power to confirm these newly baptized Christians – they did so by “laying hands” on them so that they received the fullness of the gifts and graces of the Holy Spirit.

The Sacrament of Confirmation was instituted on first Pentecost Sunday. Two weeks from now we will celebrate Pentecost when our churches will open again for public Masses (just to know, we’ll have to space people at the Masses, seating people at the ends of every other pew, but families will be able to sit together).

That first Pentecost Sunday, fifty days after Our Lord’s Resurrection, God the Father and the Son sent the Holy Spirit who came upon the Apostles as tongues of fire. This was to fulfill what Jesus said at the Last Supper, when He promised to send the Holy Spirit – our Gospel today: “I will ask the Father, and he will give you another Advocate to be with you always, the Spirit of truth, whom the world cannot accept.”

The Holy Spirit came on Pentecost to strengthen the Apostles to fulfill the mission Jesus had given them when He ascended into Heaven ten days earlier: “Go out and preach to all the nations, baptizing them, and teaching them all that I have taught you.”

The Apostles did not begin to preach and teach because they were afraid to do so; but after the Holy Spirit strengthened them they began to fulfill this great mission.

Did you know that all of us who are baptized are called to fulfill this mission in our own way? This is why we receive the Sacrament of Confirmation, to strengthen us to do so.

Our second reading: 1 Peter (he wrote 2 epistles in the NT): “Always be ready to give an explanation to anyone who asks you for a reason for your hope.”

But to fulfill this mission effectively – to be able to give an explanation of our Faith to others who inquire about it, or to defend our Faith with those who attack it, we must know our Catholic Faith; and to know it requires that we study it.

And St. Peter adds another important point: Whenever we give an explanation to anyone who asks, we must do so “with gentleness and reverence.” That’s often a difficult thing to do, especially in when discussing hot-button topics like abortion and same-sex marriage.

“Why do you Catholics worship Mary?” We don’t, we honor her – as Jesus does even now, because Mary remains His Mother in Heaven; and we ask her to pray for us – that’s what we do in the Hail Mary prayer (which, by the way, comes from chapter 1 of St. Luke’s Gospel).

“Why are you against a woman’s ‘right to choose’?” Well, there is no “right” to do wrong, to do evil – Abraham Lincoln said the same thing in his debates with people who were “pro-choice” on the matter of slavery, saying: “I wouldn’t own a slave myself, but I can’t force my opinion on other people who choose to own slaves.” Abortion is murder, plain and simple; and there is no “right” to kill innocent children in the womb.

“Why do you hate gays – and say they can’t get married?” We don’t hate anyone, we love them; and because we love them we tell people the truth about the human person, created male and female by God.

And we defend marriage as instituted by God from the beginning of the human race, an institution which is ordered by nature to procreation of children, and for that reason depends upon the complementarity – both physical and emotional – of the spouses, male and female.

Now, it’s not easy to remain calm in explaining and defending the teachings of Christ and His Church. The Holy Spirit’s Gift of Counsel helps us to do so in the heat of a debate, to say what God wants us to say.

St. Peter also warns us that that defending our faith will be difficult at times. He says in today’s epistle that we will be maligned and defamed, and that we will suffer. Jesus Himself says the same in many passages in the Gospel: “If they hated me, they will hate you; if they persecuted me, they will persecute you.”

I firmly believe that these warnings apply particularly to our present time in world history, which may in fact be the “End Times.” I’m not alone in this thinking.

Pope Benedict is quoted as saying that “the real threat to the Church [today] . . . consists . . . in the worldwide dictatorship of seemingly humanistic ideologies. . . . A hundred years ago, everyone would have thought it absurd to speak of a homosexual marriage. Today whoever opposes it is socially excommunicated. The same applies to abortion and the production of human beings in the laboratory. Modern society,” says Pope Benedict, “is in the process of formulating an ‘anti-Christian creed’ . . . this spiritual power of the Antichrist . . . truly takes the prayers of . . . the universal Church to resist it.”

But defending our Catholic Faith – even though we will be maligned and defamed for doing so – is worth the mistreatment, the social excommunication, and the suffering that come with it, because the reward is the salvation of souls (because not everyone will reject the truth), and ultimately, eternal happiness in the Kingdom of Heaven!