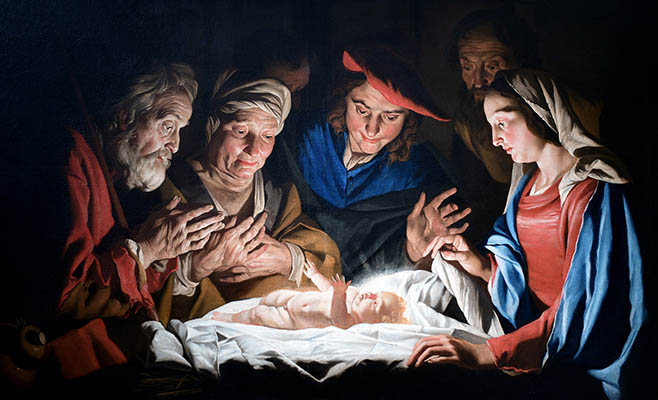 In answer to the Archangel Gabriel’s announcement of the Incarnation and Birth of our Savior, the Virgin Mary spoke the word “Fiat” – “Let it be done to me according to your word,” and she conceived the Eternal Word, who was made flesh in her womb by the power of the Holy Spirit.

As Pope St. John Paul II was wont to say, when Mary conceived Jesus in her womb, the Heart of the Son began to beat beneath the Heart of His Mother.

These two Hearts – of Mother and Son – would beat in unison for the next nine months while Jesus was living in Mary.

The human heart is the most perfect and noblest symbol of the interior life of person: of our thinking, our willing, our affections & emotions – and our love.

Never were there two Hearts more united – in grace and holiness, in mutual love and affection, than the Hearts of Jesus, the God-man, and of Mary, sinless and filled with grace from the first moment of her conception.

At His Birth, when Jesus opened His eyes for the first time, He looked into the eyes of His mother, Mary, and she gazed into His eyes.

Our interior life shines forth in our eyes, which are windows to our souls, to our hearts.

On this point, let us ask:  What was it like, O Virgin Mary, to gaze into the eyes of your Son, your Godand your Maker, for the first time?

When a ray of light is reflected by the purest crystal, it produces another ray that embraces it, in what may be called a single kiss of love.

In a similar manner, the look of Jesus was reflected in the pure eyes and the Immaculate Heart of Mary, uniting them both in a single embrace of love.

It was most fitting that the first act of contemplation by Jesus upon the earth should be most like that which He experienced from all eternity: that mutual gaze of love between the God the Son and God the Father.

On this Christmas, let us contemplate not only that look of Jesus toward His Mother, but also that first gaze of Mary into the eyes of the Christ Child.

It was a gaze:

– All-Pure, because she is the spotlessVirgin of virgins;

– Exceedingly tender, because she is the Mother who bore Jesus in her womb for nine months as a living tabernacle of the Word made flesh–and who now with greatest affection and devotion holds Him in her arms;

– Altogether Holy, because she is the holiest of creatures, the sin of Adam having never touched her.

And when the newly-born Christ Child opened His divine eyes for the first time and gazed into the pure, mild and tender eyes of the Virgin Mary, He was filled with complacency, joy and peace, because He saw in the eyes of His Mother a near-perfect reflection of that that gaze with which His heavenly Father had looked upon Him from that Eternal Day on which He was begotten.

Jesus wants to look at our hearts, our souls, as He looked upon Mary. Are our hearts pure, tender and holy – like that of the Virgin Mother?

AND Jesus wants us to look at Him in the same way that His Mother Mary did. Are we able to look at Jesus, to gaze into those divine eyes so full of love for us, with that same purity and selfless love of the Blessed Virgin?

Let us recall today, on this great feast of Christ’s Birth, that the Son of God became man and entered our world in order to reclaim lost souls for the heavenly kingdom.

But that is not all. As St. Augustine says, “The only Son of God, having become the son of Man, makes many sons of men the sons of God.” Yes, my dear friends, we are called to be sons in the Son; sons and daughters of our heavenly Father.

The Prophet Isaiah tells us thatJesus Christ is the great Light that has come into the world to enlighten us who had walked in darkness and dwelt in gloom.

And through St. Paul, Jesus exhorts us to reject godless ways and worldly desires, and to live temperately, justly and devoutly in this age, until He appears again in glory on the Last Day.

Let us rejoice on this Christmas Night (Day)with the all the angels who cry aloud with joy: Christ the Lord is born; today the Savior has appeared.

Life in the Spirit 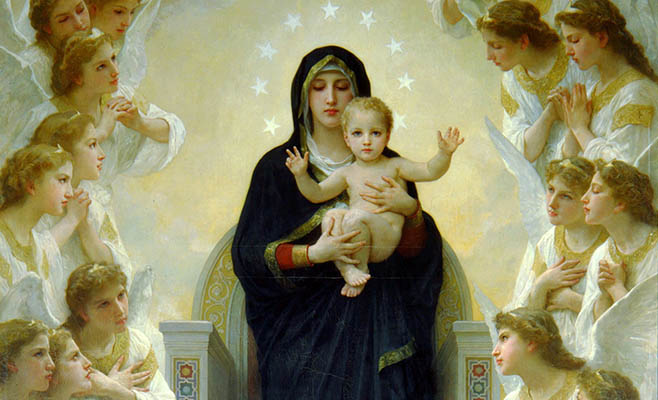 Evil of Abortion/Jesus Living in Mary