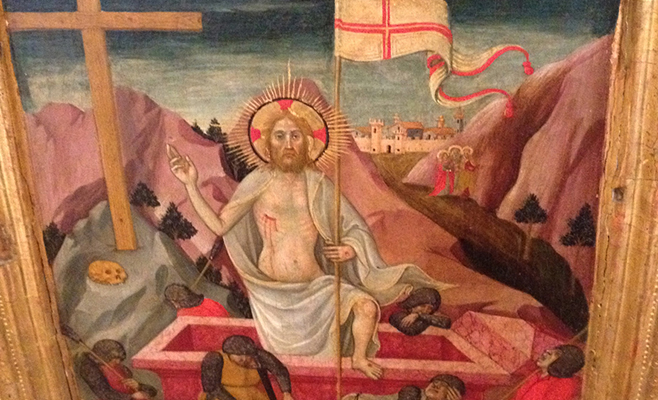 On the first Easter Sunday, Jesus Christ rose from the dead. By dying and rising He conquered sin – and death, which was the result of sin. Now, death is no longer the victor.

The death and resurrection of Jesus makes it possible for us to once again share in the very life of God – that divine life which was lost to us by the sin of Adam. And this happens through Baptism.

When we were baptized, we received a share in God’s own divine life (which we call Sanctifying Grace). This is when we spiritually died to sin (or the “old man” as St. Paul says) and rose with Jesus, our Savior, in that new life we received from Him.

If we persevere in that grace of Baptism throughout our lives, and then die in that divine life of Christ, then death has no more power over us. Even though we die bodily, we live, and will enjoy eternal life in the Kingdom of Heaven!

Moreover, Jesus promises us that if we eat His Body and drink His Blood, He will raise us up on the Last Day when He comes again, in glory; in other words, we will receive our bodies back in a more beautiful form than when we lived on earth.

Through the power of Christ’s resurrection in His Body – which is the same risen, glorified Body and Blood of Jesus which we receive in the Eucharist – we will rise on the Last Day in a body like that of Jesus when He rose from the dead; that is, in bodies glorified!

This is what every faithful Christian hopes for; this is the ultimate goal of the Christian life, of life in Christ. And this is what St. Paul tells us in our second reading today, when he says: “If you were raised with Christ [in Baptism], seek what is above. . . . Think of what is above, not of what is on earth. For you have died, and your life is hidden with Christ in God. When Christ your life appears, then you too will appear with him in glory” (Col. 3:1-4).

On that first Easter Sunday, Jesus rose from the dead. But that is not the end of the story. The Gospels tell us that He appeared to His Apostles and to the holy women.

And although the Gospels are silent on this point, Catholic Tradition holds (as many mystics attest) that Jesus appeared first to His beloved Mother, Mary. The Blessed Virgin did not go with the others to the tomb because she firmly believed that Jesus would rise from the dead, just as He had prophesied on three occasions.

Why did Jesus appear to the holy women and to His Apostles on that first Easter Sunday, and many times more over the course of the next 40 days?

Why was it so important that Jesus be seen by others after He rose from the dead? Well, for a number of reasons.

Second, to teach and instruct them. Recall how Jesus appeared to the two disciples on the road to Emmaus and enlightened them as to how He had fulfilled all the Old Testament prophecies. We can just imagine all that He revealed to the Apostles during those 40 days!

Finally, Jesus appeared to His Apostles after His resurrection to comfort and console their saddened hearts by His physical presence.

Why was it so important that Jesus be physically present to His Apostles? Here we deal with a deep mystery. An analogy will help us understand this mystery.

Imagine if a close relative or friend whom you deeply love and have not seen for many years comes to town for a visit. Would you be satisfied in just calling this person on the phone?

St. Paul, writing to his disciple Timothy, gives a beautiful witness to this truth: “I long to see you, that I may be filled with joy” (2 Tim. 1:4).

Just imagine the joy the Apostles and holy women experienced at seeing the Jesus risen from the dead, being in His physical presence, and seeing Him face-to-Face!

Imagine the joy that we will experience when we see that same Jesus, risen and in glory, face-to-Face in the Kingdom! This is our hope, which springs from our faith! This is our future glory! Have a happy and joy-filled Easter!