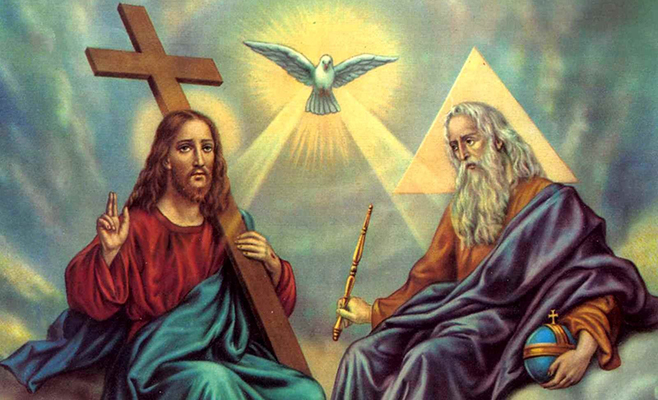 This Sunday – one week after Pentecost – is Holy Trinity Sunday.

One of the great defenders of the doctrine of the Trinity, perhaps the greatest in the history of the Church, is St. Athanasius.

St. Athanasius – known as “the Champion of Orthodoxy” – was born of Christian parents in Alexandria, Egypt in 297 AD.

He received an excellent education – which included ancient Greek philosophy and Christian doctrine.

As a youth he was instructed by a great desert hermit, St. Anthony of the Desert.

At 21 years of age – personal secretary & deacon under another Saint: Alexander, the Patriarch (Archbishop) of Alexandria. About this time Athanasius published his first written work: On the Incarnation of Jesus Christ.

In the year 323 a priest named Arius began teaching that Jesus Christ was not God: “There was a time when the Son was not.”

Arius was very persuasive – even wrote hymns to promote his heresy, sung to the melody of popular songs, and many bishops – some say most bishops, went along with his false teaching.

What happens if one says Jesus was not God, but only a creature (there was a time when He, the Son, did not exist)? YOU ELIMINATE THE HOLY TRINITY!

About 300 years after the Arian heresy – a fellow from Arabia spread the same deceptive lie: Mohammed, the founder of Islam. Islam is, in essence, Arianism repackaged, as it essentially denies that Jesus is God, denies three persons in one God.

Mohammed taught: “There is only God: ALLAH (Arabic for God), and Jesus was a prophet, but I am the greatest prophet of Allah”

Many historians think Mohammed picked up on Arianism, which was circulating around the Middle East for centuries (heresies don’t die our easily, the Devil works to undermine the true Faith). Moslems today consider us heretics because of our belief in the Trinity, and that Jesus was God who became man.

But back to the early 4th century: The first Christian Emperor, Constantine, saw that the teaching of Arius was dividing his empire – called a council in the year 325 AD to settle the matter, which was held in Nicaea – in northwest modern day Turkey. The Pope sent representatives who were present at this first ecumenical council.

The Council of Nicaea condemned the heresy of Arianism and promulgated a Creed – believed to have been written by St. Athanasius – in which we profess Jesus is “God from God, Light from Light, True God from True God, consubstantial with the Father” – i.e., of the same substance or nature as God the Father.

Few months after the Council of Nicaea St. Alexander, the Patriarch of Alexandria, died, and St. Athanasius was chosen as successor – he was not yet 30 years old!

Well, heresies don’t die out easily – as we saw with Mohammed.

Many bishops, and some emperors who succeeded Constantine (e.g., one of his own son) were Arians, and St. Athanasius was persecuted for his orthodoxy (teaching the truth).

In fact, St. Athanasius was exiled from Alexandria 5 times, for a total of 17 years.

Under some of the emperors he had to flee and go into hiding.

There is a famous story: On one occasion the Emperor Julian the Apostate (who outlawed Christianity and tried to bring back worship of the Roman pagan gods) ordered the arrest of Athanasius, who escaped by boat on the Nile River; in the boat his companions saw an imperial galley was after them. Athanasius calmly told the rowers to turn around and row toward the emperor’s galley. The pursuers shouted out asking if they had seen Athanasius; those in Athanasius’ boat said: “He is not far off – Row fast if you want to overtake him” – and the emperor’s galley kept going same direction. Athanasius must have had a good laugh.

If all 3 Persons are God – what makes them distinct from one another? Their RELATIONS: From all eternity God the Father begets/generates the Son – the Word (analogy: we know ourselves in words/ideas); God the Father, knowing Himself perfectly, eternally generates/begets the Word – a Person.

The Son/Word is begotten eternally, and the Holy Spirit eternally proceeds from their mutual love or “breathing forth.”

It is believed St. Athanasius wrote another formula for a creed – or influenced it, the Athanasian Creed. It’s a powerful summary of the truths we believe about the Holy Trinity. It’s long, so I’ll read just the first part of it:

Whosoever will be saved, before all things it Is necessary that he hold the Catholic Faith. Which Faith unless he keep whole and undefiled, without doubt he shall perish everlastingly.

And the Catholic Faith is this, that we worship one God in Trinity and Trinity in Unity. Neither confounding the Persons, nor dividing the Substance. For there is one Person of the Father, another of the Son, and another of the Holy Ghost.

But the Godhead of the Father, of the Son and of the Holy Ghost is all One, the Glory Equal, the Majesty Co-Eternal.

The Father Eternal, the Son Eternal, and the Holy Ghost Eternal and yet they are not Three Eternals but One Eternal.

So the Father is God, the Son is God, and the Holy Ghost is God. And yet they are not Three Gods, but One God. . . . He therefore that will be saved, must thus think of the Trinity.

I’ve given today in a nutshell the theological explanation of the Holy Trinity. If you don’t understand it fully, that’s OK, because neither do I. None of us ever will understand God fully, even in Heaven, because the mystery of the Triune God is infinite, and our minds our finite.

Let us now profess our faith in the three Persons in One God.