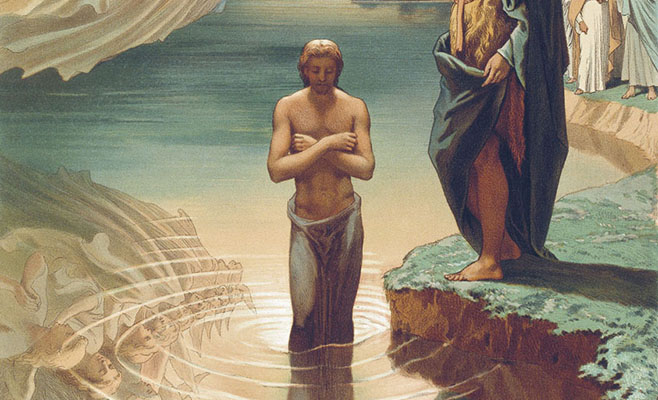 Holy Baptism of our Lord

In the feast we celebrated last week, the Epiphany, the Magi come to adore the new-born Christ child, which symbolizes that salvation is open to all peoples of all nations.
The Prophet Isaiah, in today’s first reading, says: “All who are thirsty, come to the water and drink.” All peoples on earth were thirsting for the salvation that would come from Christ and the waters of baptism.
In today’s feast, the Baptism of Our Lord, we learn how everyone can attain that salvation:
All who accept Jesus in faith and are baptized become members of the Church, Christ’s Mystical Body; they become adopted sons and daughters of God the Father and thereby can claim Heaven as their inheritance.
This is the meaning of Christ’s baptism: Jesus entered the waters of the Jordan River not because he needed purification – as God who became man He had no stain of Original Sin or personal sins.
No, Jesus underwent baptism by His cousin, John, to make holy the water with which we are baptized.
As the Second Person of the Blessed Trinity, Jesus was one in substance with God the Father and the Holy Spirit.
But at the Incarnation, the Son of God truly became man.
As the Eternal Word who became flesh, Jesus is Head of the Church, which is His Body; and as Head of the Mystical Body He was able to receive the Holy Spirit in His human nature in order to communicate it to us, and to everyone who believes in Him and undergoes baptism.
As St. Cyril of Alexandria says:
“[T]he Father can be said to give the Spirit again to the Son, though the Son possesses the Spirit as His own, in order that we may receive the Spirit in Christ. . . .
“The only-begotten Son receives the Spirit, but not for His own advantage, for the Spirit is His, and is given in Him and through Him, . . . He receives it to renew our nature in its entirety and to make it whole again, for in becoming man He took our entire nature to Himself. . . . Christ did not receive the Spirit for Himself, but rather for us in Him” – that is, He received the Spirit as Head for us who are “in Him” as members of the Church, which is His Body.
The baptism of Jesus is also an epiphany; i.e., a manifestation not only of His divinity, but also of the Triune God: of the Father and the Holy Spirit:
The Holy Spirit comes in the form of a dove. Why a dove? At St. Peter Chrysologous says, “A dove announced to Noah that that the flood had disappeared from the earth; so now a dove is to reveal that the world’s shipwreck is at an end forever.”
And from Heaven the voice of the Father is heard: “You my beloved Son; with you I am well pleased.”
God the Father reveals that Jesus is His Eternal Son – the Son whom He sent to die on the Cross and thereby make possible our cleansing from sin by baptism; to enable us to be reborn through water and the Holy Spirit and thereby make us co-heirs with Christ and reign with Him after the resurrection of the dead on the Last Day.
Let us turn once again to the Prophet Isaiah: “For just as from the heavens the rain and the snow come down and do not return there till they have watered the earth, making it fertile and fruitful, . . . So shall my word be that goes forth from my mouth; my word shall not return unto me void, but shall do my will, achieving the end for which I sent it.”
The “word” that Isaiah refers to in these lines, that comes forth from the mouth of God, is the Eternal Word, the Son, whom the Father sent to the earth to do His will, i.e., to redeem us and thereby make salvation possible to us through the waters of baptism.
On this feast of Christ’s baptism, it is well that we recall the meaning of our own baptism. As St. Hippolytus says:
“Whoever goes down into these waters of rebirth with faith renounces the devil and pledges himself to Christ. He repudiates the enemy and confesses that Christ is God, throws off his servitude [to Satan] and is raised to the status of an adopted son. He comes up from baptism resplendent as the sun, radiant in his purity, but above all, he comes as a son of God and a co-heir with Christ.”
As adopted sons and daughters of our heavenly Father, let us strive with all our might to love God and neighbor; to live pure, holy and Godly lives which reflect the spotless garments with which we were clothed at our baptism, so that on the Last Day, when Christ comes again, we will rise with bodies glorified and reign with Him forever in the heavenly Kingdom.