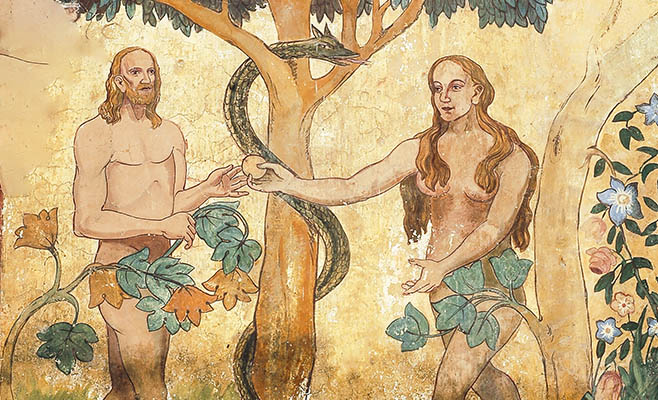 Devil’s Motive to Tempt Us

Thirteenth Sunday Year B: Envy: the Devil’s Motive to Tempt Us

“God did not make death . . . [rather], God formed man to be imperishable; [in] the image of his own nature he made him. But by the envy of the devil, death entered the world.”

This is from our first reading, from the OT Book of Wisdom.

If God did not make death; if He created man in His own image – to be imperishable –how did death come about?

Death, and human suffering, became part of our human condition because of sin – that Original Sin of Adam and Eve.

Our stained glass windows above the Stations of the Cross explain in beautiful images the history of salvation.

The first image, in front at your right side, portrays Adam and Eve in the Garden of Eden.

They were created in God’s image, meaning God made them with a rational intellect and a free will – in order to know, love, and serve God in this life, in order to be happy with Him forever in heaven.

But that’s not all. God gave our first parents a share of his own divine life, called sanctifying grace, which made them God’s friends and even the right to enter heaven; they were truly heirs of the Kingdom of Heaven.

Moreover, death was not part of the original plan of God for the human race – for Adam and Eve and all their descendants.

Most theologians are of the opinion that in God’s original plan, if Adam and Eve had not sinned and fell from God’s grace, human beings after a certain time here on earth would have been taken up to heaven without having to undergo the pain of death.

The God had to test the love of Adam and Eve; for all true love must be freely chosen; it cannot be forced upon someone.

So God allowed the devil to tempt our first parents.

That is, they would die a twofold death: he would suffer bodily death; but more importantly, they would die spiritually, losing sanctifying grace, the share of God’s life that made them friends with God and gave them the right to heaven.

Well, we know the rest of the story. Satan tempted first Eve, and then Adam, and they fell from God’s grace.

Our second stained-glass window depicts the shame of Adam and Eve being cast out of the Garden of Eden – Paradise lost.

The Book of Wisdom says that it was “by the envy of the devil that death entered the world.”

What exactly is envy? It is one of the seven deadly sins, that is, of the seven ways that we are inclined to rebel against God due to our fallen human nature.

Envy is defined as sadness or sorrow over the excellence, good fortune, or success of another; when someone considers himself deprived of what another has: intellectual or physical talents, good looks, etc.

Envy goes beyond mere jealousy, desiring what someone else has, which can be a good thing – we’ll work harder at our golf game to be as good as someone else.

Envy actually desires that the good of another be taken away; that he be deprived of it – precisely because we ourselves don’t have that good. And here we can see how envy is linked, and rooted in, pride – the real root of all sin.

St. Augustine called envy a “most wicked sin”; a sin against charity, which always wills, and rejoices in, the good of another.

So, why did the devil envy Adam and Eve – and why does he envy us: his motive in tempting them – and us – to sin?

Because by his rebellion against God, he (and the other angels who rebelled with him) lost eternal happiness in heaven.

Why does God permit the devil to tempt us? This is indeed a mystery. It is part of God’s Providence; His providential plan for the human race.

But we do know that the Devil truly does tempt us.

What are the main tactics the devil uses in tempting? One major tactic he uses is is to convince people that he does not exist.

The existence of Satan and the fallen Angels is a truth revealed by God. Jesus Himself tells us that the devil is a murderer (of divine life in souls) from the beginning; and that he is the Prince of this world (although not the King – who is Jesus Christ – the King of kings and Lord of lords).

In tempting us, the devil and his fallen angels know our weaknesses, because they study us, and will attack in the places that we are most weak and prone to sin.

C.S. Lewis, in his brilliant novel The Screwtape Letters, portrays a seasoned demon giving advice on how to tempt human beings. A marvelous read!

St. Teresa of Avila (Carmelite and Doctor of the Church) says that one common tactic of the devil is to “make us believe that we have virtues when we do not.” This leads to false confidence in ourselves.

She says that “The truly humble person always walks in doubt about his own virtues.”

Old song, “O Lord it’s hard to be humble, when you’re perfect in every way,” pokes fun at this prideful and vain mentality.

I tell students: “I’m the most humble person I know.” (Ha)

Yes, Satan tempts us. We are in spiritual warfare – always. 2nd Peter: “The devil prowls about like a roaring lion, looking for someone to devour. Resist him, solid in your faith.”

However, the power of Satan, although real, is limited. He is only a creature, whose power is limited and subordinated to the will and dominion of God.

And God will always give us the grace to resist temptations, provided we ask for it.

This is why we need to pray – as we do in the Our Father prayer: “Lead us not into temptation” – i.e., do not permit us to be tempted beyond our ability to resist.

And, “deliver us from evil.” Our English translation is somewhat misleading. In the original Greek, there is a definite article before the word “evil”: it reads: “deliver us from the evil” – i.e., from the Evil One.

In other words, we pray not just to be delivered from some abstract evil, but from one who personifies evil, an angelic person, Satan, the Evil One, the angel who hates and opposes God (cf. CCC 2851).

Jesus Himself, in His priestly prayer at the Last Supper, said: I pray heavenly Father “that thou shouldn’t keep them from the evil one” (Jn. 17:5).

The truly humble person that is not overconfident; he realizes that he can fall any time, and constantly prays to God for the strength to resist temptations.

Let us imitate the Blessed Virgin Mary, a perfect model of humility, in always having confidence in God and appealing for His grace to strengthen us against the wiles and tactics of the Evil One.