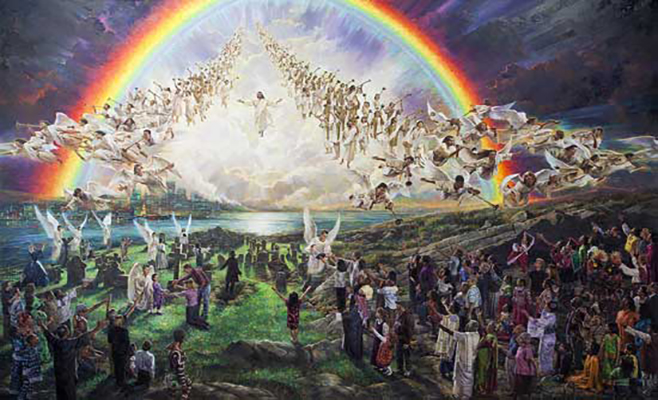 Today we hear these awe-inspiring words from the Prophet Malachi: “Lo, the day is coming, blazing like an oven, when all the proud and all evildoers will be stubble, and that day that is coming will set them on fire, says the Lord of hosts. But for you who fear my name, there will arise the sun of justice with its healing rays.”

Of what “day” does the Prophet Malachi speak? He refers to the Day of the Lord, the final day of the world, when Jesus, the Son of Justice, will come again to judge the living and the dead.

In our Gospel today from St. Luke, we hear Jesus describing the events that will precede His Second Coming at the end of the world.

Actually, in today’s Gospel Jesus describes two events: first, the destruction of Jerusalem and the Temple by the Roman armies under the Emperor Trajan which would take place in 70 A.D.: in regard to the Temple, He says “there will not be left a stone upon another stone that will not be thrown down” (only “wailing wall” left);

and second, he describes the things that will precede His Second Coming.

Why does he speak of both events in the same context? Because the violence and upheaval that would accompany the destruction of the Temple will be a both small version, and a foreshadowing, of the violence and turmoil that will come before the end of the world.

In ch. 21 of St. Luke’s Gospel, as well as in ch. 24 of St. Matthew’s and ch. 13 of St. Mark’s, Our Lord reveals the signs that will proceed the end of the world and His Second Coming – more remote signs, and more immediate signs.

For example, today we hear Jesus say: “nation will rise against nation, and kingdom against kingdom. There will be powerful earthquakes, famines, and plagues from place to place.” Sin and evil will increase. In Matthew’s Gospel Jesus specifies that “nation rising against nation” and “earthquakes, famines and plagues “are the beginning of the labor pains” – in other words, more remote signs – that the end of the world is coming, but still a ways off.

And in today’s Gospel from St. Luke, as well as in the Gospels of Saints Matthew and Mark, Jesus warns us: “Do not be deceived, for many will come in my name saying, ‘I am he.’” Here Our Lord is speaking of many false Christs, or “antichrists,” who will come throughout the centuries and will lead people away from His true Gospel and the One, Holy, Catholic and Apostolic Church that He founded on Peter and the Apostles.

In his first epistle, St. John the Evangelist speaks of “many antichrists” who will come; he describes them in these words: “Who is the Antichrist? He who denies that Jesus is the Christ, and who denies the Father and the Son, is an antichrist (1 Jn. 2:22). In fact, there have been many antichrists throughout history – precursors of the final Antichrist; some who were religious leaders: like Arius (the 4th century priest who denied that Jesus was the eternal Son of God), Mohammed, the founder of Islam (who likewise denied that Jesus was God), and Joseph Smith, founder of Mormonism (which embraces polytheism); some who were secular leaders: like the Emperor Nero, and more recently, Hitler, Stalin and Mao Zedong.

But immediately before Jesus’ Second Coming, the final Antichrist will come – he of whom St. Paul refers in 2 Thessalonians as “the lawless one” and the “man of perdition” (2:3) who “exalts himself above every so-called god . . . claiming that he is a god” (2:4). This is the man St. John, in the Book of Revelation, refers to as “the Beast” (ch. 13) and assigns him the mysterious number of “666” (13:18). This “man of iniquity” will openly deny Our Lord Jesus Christ to be the Son of God who came in the flesh. Christ came in the name of His Father; the Antichrist will come, as Jesus tells us, “in his own name” (Jn. 5:43).

What will be the signs, and what will pave the way, for worldwide acceptance of this great deceiver, the Antichrist? St. Paul reveals to us in 2 Thess. that before the “man of perdition” appears, there must first come “the great apostasy,” i.e, the great falling away from the faith by masses of people throughout the world. Once people have fallen away from the true faith and belief in Jesus Christ, they will be ready to accept someone who deceives them into thinking that he is the Messiah.

Saints and scholars are of the opinion that the Antichrist will come at a time when there will be great upheaval in the world, possibly when powerful nations will be on the brink of war; the Antichrist will then appear on the world scene, masquerading as a man of peace. He will deceive government leaders throughout the world, who will hand over to him all political and economic power; then, when his power is consolidated, he will try to impose a false religion, false worship, and ultimately demand worship of himself.

Both the Prophet Daniel and the Book of Revelation reveal that the Antichrist will rule the world for 3 ½ years (in imitation of Christ’s 3 ½ years of public ministry); during which time he will bring a true reign of terror upon the Church, and will unleash the last and greatest persecution upon the faithful that the world has ever seen. The Prophet Daniel says: “It shall be a time unsurpassed in distress since nations began until that time. . . . many shall fall away and evil shall increase” (Dan. Ch. 12).

Some saints think that the persecution will be so great that, during the reign of the Antichrist, the Mass will not be offered publicly anywhere in the world, based on the Prophet Daniel’s words: “He [the Antichrist] will abolish sacrifice and oblation” (i.e., the Sacrifice of the Mass).

But it will also be the time of the greatest saints and martyrs, those who are most devoted to Our Lady – because, as the Book of Genesis (3:15) tells us, the battle will be between the serpent (Satan) and “the woman” (Mary), between his seed and her seed (i.e., Mary’s Son, Our Lord), and she will crush his head.

Finally, Jesus will bring the Antichrist’s reign to an end, at which time, with his Second Coming, Christ’s Kingdom will be definitively established.

The Catechism of the Catholic Church gives us sound teaching and guidance on these matters:

675 “Before Christ’s second coming the Church must pass through a final trial that will shake the faith of many believers. The persecution that accompanies her pilgrimage on earth will unveil the “mystery of iniquity” in the form of a religious deception offering men an apparent solution to their problems at the price of apostasy from the truth. The supreme religious deception is that of the Antichrist, a pseudo [or false] messianism by which man glorifies himself in place of God and of his Messiah come in the flesh.”

677 “The Church will enter the glory of the kingdom only through this final Passover, . . . only by God’s victory over the final unleashing of evil, . . . God’s triumph over the revolt of evil will take the form of the Last Judgment after the final cosmic upheaval of this passing world.”

When will all these things happen? When will the Antichrist make his appearance? Could we live to see the day?

Sister Lucy, the third Fatima visionary, died in 2005 as a Carmelite nun. In a 1957 interview with Fr. Augustine Fuentes, who at that time was the postulator for the cause of canonization of the other two Fatima visionaries, Jacinta and Francisco, Sister Lucy said this to him:

“Father, the Most Holy Virgin did not tell me that we are in the last times of the world but She made me understand this for [the following] reasons. The first reason is because She told me that the devil is in the mood for engaging in a decisive battle against the Virgin. And a decisive battle is the final battle where one side will be victorious and the other side will suffer defeat. Hence from now on we must choose sides. Either we are for God or we are for the devil. There is no other possibility.

“The second reason is because She said to my cousins as well as to myself that God is giving two last remedies to the world. These are the Holy Rosary and Devotion to the Immaculate Heart of Mary.”

And consider these words spoken by a Polish bishop at a meeting of bishops in Philadelphia in early November. 1978: “We are now standing in the face of the greatest historical confrontation humanity has gone through. I do not think that wide circles of the American society or wide circles of the Christian community realize this fully. We are now facing the final confrontation between the church and the anti-church, of the Gospel versus the anti-gospel.” That Polish bishop was none other than Carol Wojtyla, who was later elected Pope and took the name John Paul II, and who is now St. John Paul II.

These are sobering words, indeed. What does our Lord want us to do? To be faithful to Him; to be prepared, which means to always be in a state of grace (because in the end, all that really matters is that we die in a state of grace). We know not the day nor the hour of His glorious return. The key to being prepared is to persevere in remaining faithful. In today’s Gospel Jesus assures us: “He who perseveres to the end will be saved.”

Finally, let us remember that the victory is ours, if we remain faithful, for Christ has already conquered by His death and glorious Resurrection; and as Our Lady told us at Fatima, “In the end, my Immaculate Heart will triumph.” How? The Blessed Virgin Mary, the “Woman” of Genesis 3:15, will crush the proud head of the serpent (Satan) under her foot!